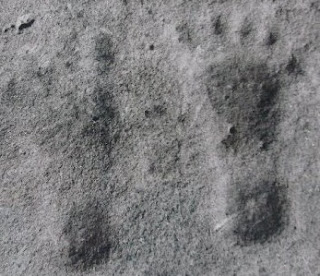 In 1931, Dr. Wilbur Greeley Burroughs (1886-1974) discovered ten complete (and several fragmented) human footprints. They were 9.5 inches long, and were found in the Carboniferous rocks of Otto Finnell's farm. They are known as the "Rockcastle County footprints", the "Kentucky prints/tracks", and the "Loman Hill prints/tracks".

In a display predating the likes of Carl Baugh, Burroughs made a number of rather baseless claims regarding the nature of the tracks, such as unspecified "examination" proving that they could not have been carvings, and that micro-analysis demonstrated compressed sand grains. He even invented a new genus and species name for alleged track maker - Phenanthropus mirabilis ("a man appearing miraculously").

The New York Times reported on the find in 1938, and Burroughs waited to report the finding until some years after. Although the tracks are currently used by young earth creationists in an attempt to demonstrate that modern geology must be mistaken in it's current view of the Earth's history, Burroughs accepted the age of the earth as it was known at the time, and believed the prints to demonstrate that mankind was much older than was previously thought.

The Science Department of Dr. Burroughs alma mater, a religious school called Berea College, claimed to have removed some of the tracks for "further study", but nothing more ever seemed to come of this.

In 1940, Burroughs interpretation of the tracks was being challenged, most notably by Albert Graham Ingalls (1888-1958), a science editor, as well as an amateur astronomer and telescopist. He pointed out in The Carboniferous Mystery (Scientific American, January 1940) that scientists believed that the tracks and others throughout the Rocky Mountains could not possibly be human, as there existed no other evidence anywhere to suggest such a vast antiquity of man (250,000,000 years ago).

David Ives Bushnell Jr. (1875-1941), lifelong anthropologic investigator and a contributing author to the Handbook of American Indians, disagreed with Burroughs and identified the tracks, and the others, as Native American petroglyphs.

Then in August of 1970, Fred E. Coy Jr. and Thomas C. Fuller documented the Loman Hill petroglyphs, and they were later included in their 1997 book of Native American pictographs and petroglyphs (Rock Art of Kentucky, 1970), which was the result of 32 years of research.

The prints found at the Loman Hill petroglyph site are extremely similar to the carvings found at similar other sites discussed in depth in the book. Due to technical issues, I am unable to provide photos here in this article, but if you follow the GoogleBooks link below, you will be able to view the images being referenced here by page number. Some sites with extremely similar carved footprints would be the Sparks Indian Rock House site (pp. 53), the William Gay site (pp. 74), the Peter Cave site (pp. 77), the Cave Fork Hill site (pp. 83), the Stone Foot Rockshelter site (pp. 101), and many others, all bearing a striking resemblance to the tracks at the Loman Hill site.

Thus the evidence strongly suggests that what Burroughs found were merely the ancient carvings of Kentuckian Native Americans, and were not those of a 250,000,000 year old man.

As stated previously, such petroglyphs of human footprints have been found throughout Kentucky and elsewhere. A similar case would be that of the Jackson County Footprints, when in 1885, another member of Berea College (Professor J. F. Brown) claimed to have discovered the footprints of humans and other mammals in Carboniferous limestone, but did not record the location, take any photographs, or any other field notes or sketches. They were claimed to have been found in Big Hill, Jackson County, Kentucky.

An article by Keith Fitzpatrick-Matthews suggests that the prints found by Brown were the ones of the Peter Cave petroglyph site (pp. 77 of the GoogleBooks link below), as they are located in the same general area as the ones he described, and match his description very well.

In conclusion, it would seem that many sets of human and animal footprints were carved by Kentuckian Native Americans and early in our country's history, they were mistaken for actual human footprints. No other evidence exists (at least to my knowledge) that supports the idea of either human beings being present in the Carboniferous period, or that what we interpret as the Carboniferous was actually laid down in the past 300,000 years. 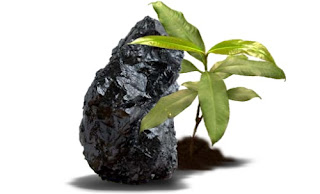